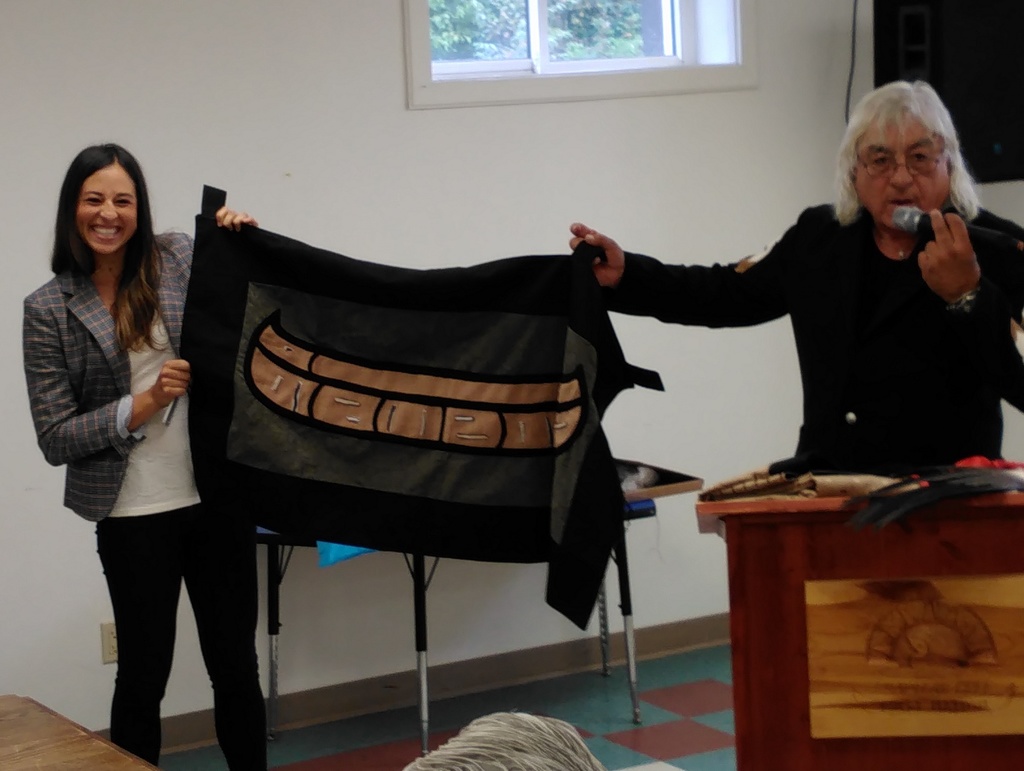 This story starts in the late summer in 1986. Even though Loreen was 8 months pregnant, we decided to take a family trip with my Mom and Dad and Loreen’s mom Jackie. We visited and Mackinaw Island and I remember my Dad embarrassing my Mom on the balcony of the Grand Hotel on Mackinaw Island replaying a famous scene by Christopher Reeve and Jane Seymour from the movie “Somewhere in Time” which was actually one of my favorite time-travel movies. 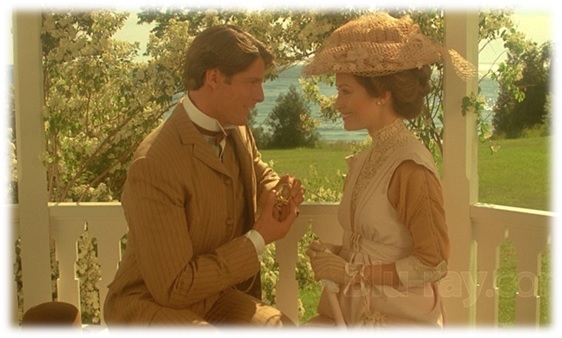 We ended out trip back in the Sault to spend a couple of more days there before my parents and Jackie drove back to Chapleau. This picture below was taken in the dining room of first home that we owned in the Sault on Paladin Avenue. Of course, I would give anything to have another dinner like that but that is not the way our world works. 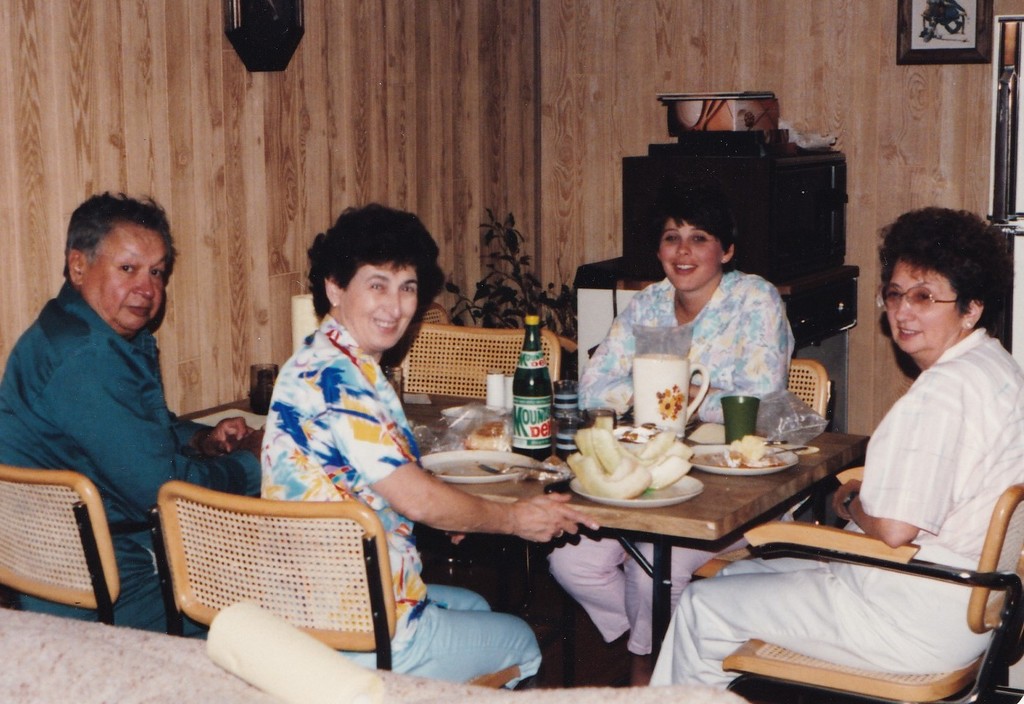 Near the middle of October, 1986, shortly after what would be my Dad’s last moose hunt, he had a fairly debilitating stroke as a result of heart disease that he actually had for most of his life; he had a heart murmur that eventually caused issues later. Thankfully, after his first heart attack in 1983, our family realized that our time together was likely limited so we focused on getting together as often as we could.

Later in the Fall of ’86, I passed on our family moose hunt since Loreen was due to have our first child who would become Kaitlin. I was fortunate that my Dad was sent from the Chapleau Hospital to Sault Ste. Marie and my Mom also came to stay with us and we saw him every day for the next 2 weeks.

About a week after he came to the Sault, Loreen went into labour and we checked into the General Hospital and a day later, Kaitlin came into this world, through a doorway in the eastern sky, the natives would say. 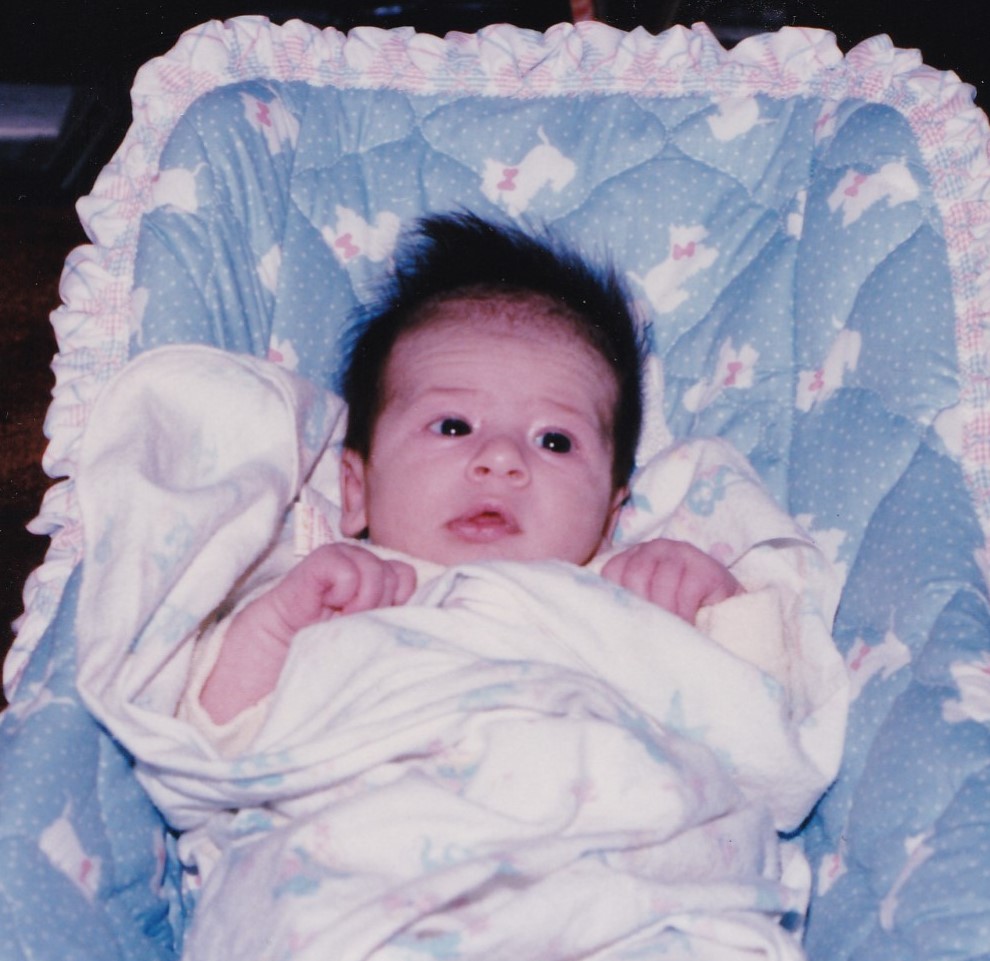 My Dad was in the Plummer Hospital right next door to the General and so for a few days, I was shuffling back and forth between to the two to see my Dad and Mom who was with him non-stop through those two weeks.

After few days, Kaitlin and Loreen were released from the hospital and we decided it would be great to introduce Dad to his newest Granddaughter. It was a good day for him that day and he was sitting up in a chair in his room when we came in. He was still a little stressed from his stroke but he knew all of us  and had his memories and wits about him.  After a few moments of explaining that we had just had our first baby and we had called her Kaitlin, Dad motioned with his good arm that he would like to hold Kaitlin. Being new parents, I have to admit that we were a bit nervous but we placed her on his lap and he held her the best he could. He didn’t say a ton because he was still having some communication problems but he did say a few words, some of which I have long since forgotten I guess. What we all do remember was that he finally patted her tiny (and very hairy) head and said “She will be a good one, she will be able to carry a 14 foot canoe”.

As a side bar, my dad was not a status native at the time; he had ‘sold’ his status to the government during something called Enfranchisement where natives were 'enfranchised' into Canadian society giving up their treaty rights but gaining the rights of Canadian citizens. You might now think that my Dad, and others, were fools to give up their native heritage but you must understand the environment of that time. Because of the societal issues regarding First Nations peoples at the time, it seemed best to distance one’s self from these issues and that was what he chose to do. Shortly before his passing, Bill C-31 quietly reversed the impact of Enfranchisement and later, my 3 brothers and I received our First Nation status and became members of Chapleau Cree First Nation which was the nation founded by our great grandparents Walter and Mary Ritchie and Isaiah Sailors and his wife Mary (McCleod).

As for the story of Kaitlin and my Dad’s one and only meeting, and the story of the 14 foot canoe, of course it became a family favorite and we never let Kaitlin or anyone else forget it. No one can say for sure why Kaitlin eventually chose Native Studies as a focus in her post secondary education but I believe it definitely had something to do with her short visit with her Grandpa.

So fast forward about 25 years and Kaitlin and her law-school-study-mate, and now her roommate, Kate decided they would rent a canoe and take a paddle in Algonquin Park. Kaitlin was driving a Jeep Liberty then and the rental guy fixed them up with some roof-racks and tied the canoe on and they were on their way. When they got to the lake, knowing the story and having this opportunity, Kaitlin had to see if she could actually carry the canoe as her Grandpa had predicted, and of course she did with no problem at all. 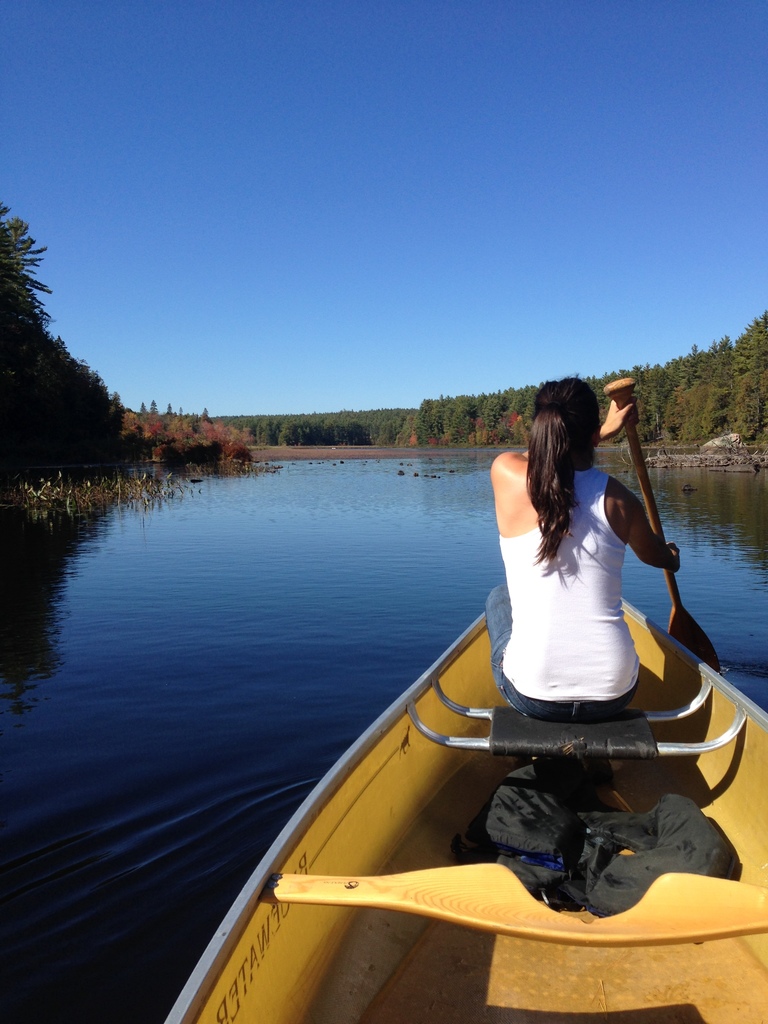 So fast forward another 5 years to September 17, 2016, and Chapleau Cree was holding its community celebration of the Treaty Land Entitlement (TLE) settlement with Canada and Ontario. It was a great event with a piping and drumming and singing ceremony in the Turtle Lodge followed by more celebration in the hall of the Band office. There were speeches from all parties recognizing the 8 years of work and negotiations that went into concluding the entitlement that was prescribed in the 1906 James Bay Treaty signed by Chapleau Cree and many other First Nations. There was also a special recognition given to Doreen Cachagee for the work that her and her family did in securing the land and organizing the development for the Fox Lake Reserve. 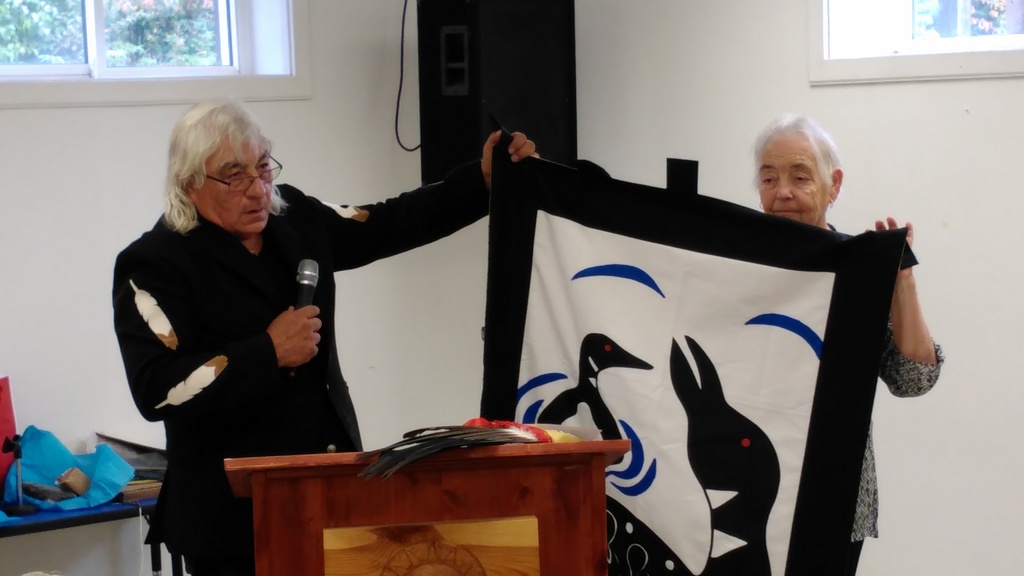 Kaitlin did think that she may get called up to say a few words representing her law firm OKT that has worked the file from the beginning. Kaitlin herself was on the file for 5 years starting there during the summers between her years at law school. What Kaitlin, or any of us, DID NOT expect, is that she would get a special gift from CCFN and the TLE Committee for her work on the project. It was a beautiful tapestry depicting a canoe and Chief Keeter Corston mentioned that it is meant to signify the journey that Katilin and the whole TLE committee has traveled over many years. Of course, to Kaitlin and to us sitting in the audience, it also had a deeper meaning of the journey that began with a pat on the head and a few words spoken by her native Grandfather 30 years earlier. I have always thought that it was more than just a coincidence that as she was entering through the door in the eastern sky, my Father was leaving through the one in the west and this is how the native people have seen life forever. Everything is circular; nothing ends without something else beginning like Summer, through Fall, into the coldness and darkness of Winter only to begin new life again with the coming of Spring.

I don’t remember sharing the canoe story with Chief Corston, or any of the members of the TLE committee, but somehow, the canoe is what they felt they had to give to Kaitlin; it could not have been a better choice. I am positive her Grandpa was there in that hall on September 17 seeing her with her canoe and smiling his proud and happy smile. 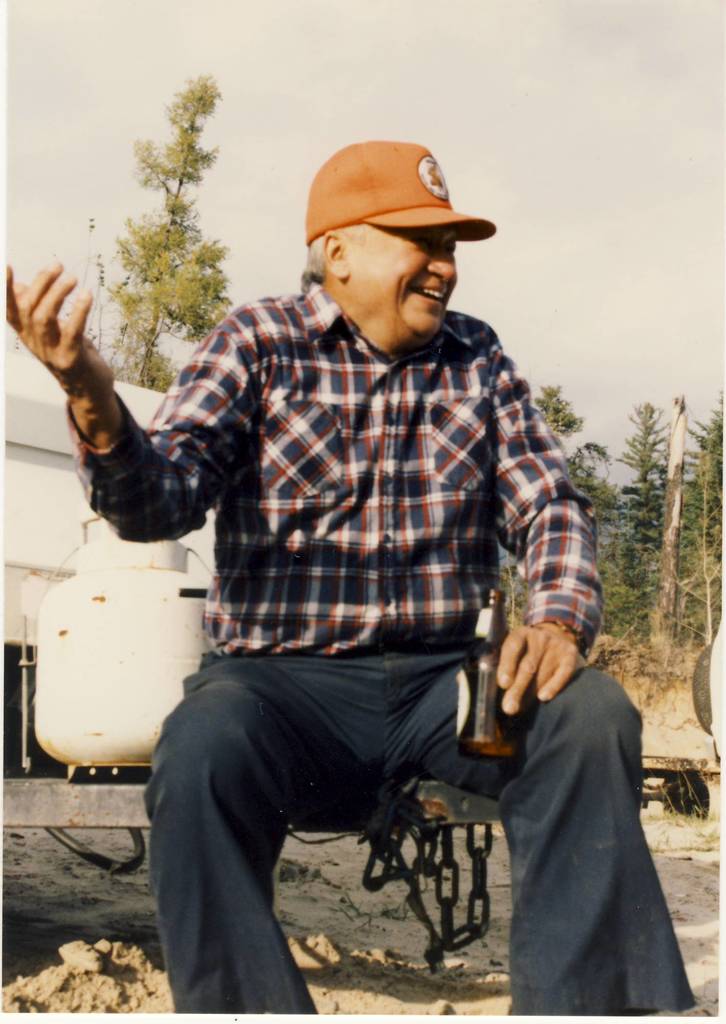 Photo courtesy of Al Ritchie who took this during our Dad's last hunt in 1986.

Fantastic story Brian. Great photos and memories of your Dad...he was a true gentleman.

And I know he would be tremendously proud of Kaitlin!

A fabulous story, Brian!  Love the symbolism of the strength in carrying the 14 foot canoe.

I was thrilled to be able to be there and witness the ceremony and signing that day.  It was touching to see your daughter being honoured.

Isaiah's wife was Mary McCleod, her Mother Sophia Patukuyapan (a name which morphed to Potts) married John McCauley and also settled in Chapleau.

Thanks Laurie for the name and the explanation of the Potts family. It was great seeing you in Chapleau.

I knew you would be able to provide Isaiah's wife's name. Do you have any documentation on the CCFN family histories. It would be great if you could share more at your convenience of course.

My eyes are watering. What an amazing journey.

I can't wait to be Kaitlin's roommate and have the 14 foot canoe hang proudly in our entrance!