The Music Of Spring

Today, I was at a celebration of a friend's fiftieth wedding anniversary, and got talking to a few other friends who encouraged me to post more of my stories...

After getting home, and thinking about it, I decided to re-post a few here at Kamazooie, because the old site (Geocities.com) I used back then closed in 2009, and the stories are now only archived and cannot be edited, or new stories added.

If you have the interest, you can find more by 'googling' me (Lark Ritchie) However, I will try to bring them all to Kamazooie, where I may begin to write a few more thoughts that wander through my head.

The Music of Spring

On a sunny Saturday morning in May of 1959, my father stepped out onto the porch of our home and called to my brother and I who were playing in the back yard. "Com’on, we’re gonna take paddle down the river to see something!" I was ten, and my brother, Darryl, eight.

"Down the river," meant an adventure to us, ducks in spring plumage, muskrats and beaver navigating the edges of the marsh, and maybe the sight of a moose.

A warm south wind was carrying summer back into the north. For us, it would be the first water travel of the new season.

Minutes later, with a lunch packed by our mother, dad slipped the old canoe into the water, and we scrambled into it, paddles in hand. Looking up towards our house, Mom waved to us as we backed out from the shore, and Grannie, on the steps of her home, next door, wailed her familiar caution, "Be careful, you can drownnnn!"

We waved good bye as the canoe swung north into the stream of a million stars that reflected the sun into our eyes.

The conversation in the canoe was that of father and sons. "How far are we going?"

"No, there’s still ice there, but today it will go... sometime today; we’re going there to hear it go."

The questions were interrupted by ducks in flight, and my brother and I pantomimed hunters with shotguns leading the birds as they flew towards us. As they crested over the canoe, we both ‘powed’ our particular ducks, and in our minds they plummeted to the water. It was a reenactment of a ritual the men in our family repeated time and again on the water, a sharpening of shooting skills, in preparation for hunting.

In early May, the Chapleau ‘back-river’ opens up a week or so before the ‘big lake’ a widening of the waterway where the ‘front river’ and back river met, some three miles from our home. The current was faster in the narrows leading to the big lake, moving with increased runoff from the land, the water, a fraction of a degree warmer. In later years, I would make the same first trip either with my brothers or friends, or alone. There is something about that first trip on the water, of rounding familiar bends, of re-acknowledging the beaver houses, and the old campgrounds, of comparing the water-levels to other years, and re-entering the new season, familiar, yet totally new.

The brown marshes are beginning to green at this time, red-wing blackbirds hang on last year’s bullrushes, warning marsh-beings of invaders with their calls. "Creeee-icczzz!" "Creeee-icczzz!" And every hundred or so yards, ducks skitter along the water, taking flight, leaving widening triangular wakes shimmering in the sun. Muskrats, sunning themselves on clumps of partially submerged marsh, awake at one’s approach and slide noiselessly into the water, disappearing beneath the water’s surface. And although we are ever on the watch for a moose, we hardly see them. There is no need to be at the water’s edge. Water plants have not yet grown, and food is abundant on higher ground.

The first ride of 1959 was no different than any other that had happened on that river over past hundreds of years. What was important to us, was that we were on it, a part of that bustling natural city of activity, of motion, of most beautiful noise… Traveling the river, emerging into summer...

We looked for our moose, scanned the shores, and the ponds that dotted the marshes beyond the river’s edge. Every few minutes, one of us would quietly announce, "No Moose…" Again, a traditional family ritual, a way of stating a reason for being, our job, and our occupation. And every so often, a stern warning from dad, "Okay, enough playing.. you’ll tip us.." or a commentary on a fish taken ‘right in there’ or "right over there." And not infrequently, an even more urgent warning, "Settle down! Now!" And we would pull our hands from the water, and warm them in our mouths, or our under our arms and sit tight… for about three minutes…

We reached the big lake about noon, confronted with a masses of black ice fringed with an edge of white crystals that blocked our way. The canoe skimmed along the barrier, as we sought a path to go further. Slowly choosing our way we gained some fifty yards. "Here’s what we’re gonna do.." explained dad, "I’m gonna push the canoe up on the ice, and one of you will straddle the bow and I’ll do the same back here… We’ll walk the canoe over the ice to that water along the shore…. When you get tired, switch places."

And so we did… in a relay, and with some puffing, we covered a distance of a quarter mile in less than half an hour, and were again paddling in a channel formed by the shore and the ice, some twenty to fifty feet wide. At the entrance to Jackson Lake, we stopped for a stretch and lunch. The heat of the sun was countered by the wind, carrying the cold of the ice. Dad explained that the south wind would move the ice soon, and that we needed to be a little further down the river. The ice would begin moving and we wanted to be where we could hear it best, about a mile further. He stood and stretched, his signal that we were on the move.

Back in the canoe, we traveled no more than ten minutes. "It’s starting," he announced, "See, behind us, over there?" And the channel in which we were moving, was slowly narrowing. "We have to hurry. Paddle!" We did our best, and the canoe surged rhythmically forward, like a porpoise breaking the water, reaching the shore at the edge of the marsh near the Downie’s lake portage. "Everybody out! The canoe’s coming out of the water." We pulled it up, entirely out of the water, and off the shore some thirty feet. "Okay… Now Sit and listen!" And we sat and watched the channel shrink as the ice moved in.

I expected the ice to hit the shore, leaving us stranded, with another long canoe-walk ahead of us., but as we watched, the ice plowed over the shore, moving up onto beach. I was amazed.

Ever so slowly, an inch every ten seconds, the mottled black ice forced its way onto the land, fracturing itself in long, pencil thin crystals, six to eight inches in length. Jewels, clear and sparkling, splintering from the lake… and I became aware of a sound, a quiet tinkling of chimes, multiplied by thousands, filling the air, unceasingly. For over an hour we watched and heard a half mile of ice generate itself into mounds of diamonds several feet high. And in our laughing and talking and touching, we learned of mass, and momentum, of crystallization, the power of wind and sun, and of the struggle of winter and summer. We each ate an apple and babbled of how we could begin fishing, the coming summer, and swimming on the river. We saw the end of winter pass before our eyes onto the beach, and the beautiful blue water that arrived that day. We had heard the subtle song of spring. I shall never forget it as long as I live.

Such experiences, serve to connect generations and help to build a set of values that connect us to nature much different than the experiential values of an urban dweller.

The Chapleau River, as it leaves the town, heading east, and then north, all the way to Moose Factory, birthplace of my Grandfather and Grandmother Ritchie... 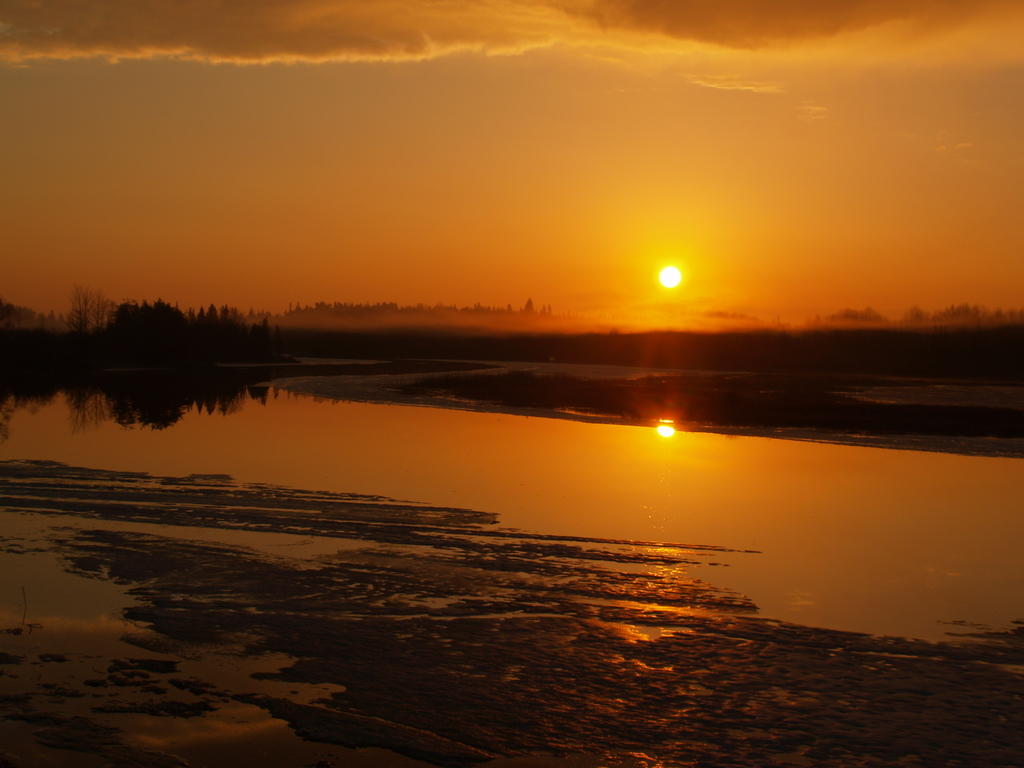 To others it may seem just a nice picture.. to me it shows the activities that happened here... most recent (look closely, in the foreground) were the snowmobilers... but beyond that, there are memories of my grandfather, my father, my brothers, and friends... and withing the range of this one photo, there are many stories... I can tell you stories about almost every piece of land and water you can see... for example... the story you've read above...
- Lark

A beautiful story Lark. I too have heard that sound; it is truly a spiritual symphony. He was a wise man to know that this would be the exact time that this would happen and to take you to the place where it would be most spectacular. Even wiser to commit to the moment and gather his sons for an impromptu outing when he could have brushed it off and carried on with the maintenance of everyday life. Your story makes me miss him very much but also cherish the time we had and the memories we still have of growing up with him as a father, educator and mentor.

Hey Lark, thanks for sharing.  Your father seems like a great guy to take you out for this special event. I wish I could have met him. This is a great memory to cherish.

Laboratory Fume Hoods: A Brief Introduction and Its Types

Fume hoods are generally used to keep vapours and toxic gases from contaminating the surroundings. This equipment, which is frequently used in laboratories, is critical for keeping people safe when they are exposed to hazardous chemicals. If you operate with chemicals, a ventilation system is essential for keeping harmful vapours out of the air. Fume hood plays a huge role in…